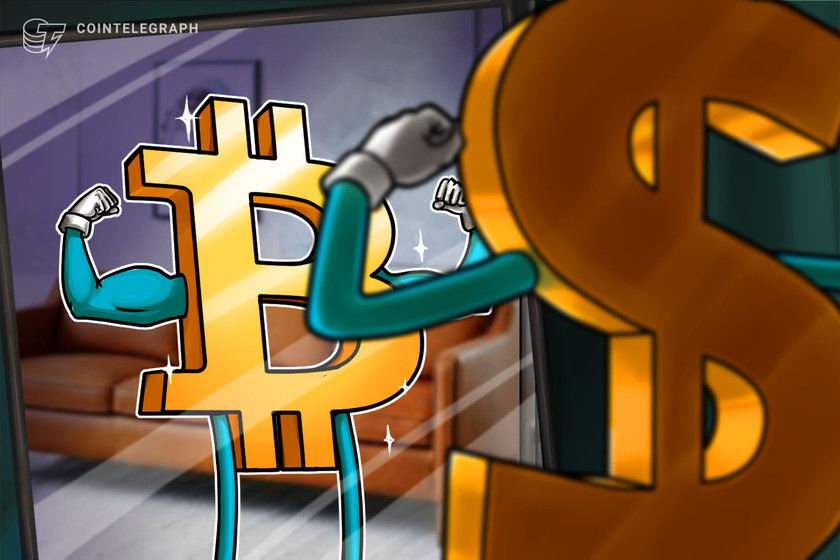 Bitcoin (BTC) regained its bullish strength after reclaiming $50,000 last week and continued to hold the psychological level as support on Dec. 27. Meanwhile, its rival for the top safe-haven spot, the U.S. dollar, also bounced off a critical price floor, hinting that it would continue rallying through into 2022.Triangle breakoutThe U.S. dollar index (DXY), which measures the greenback’s strength against a basket of top foreign currencies, has been trending towards the apex of a “symmetrical triangle” pattern on its daily chart. In doing so, the index has been treating the structure’s lower trendline as its solid support level, thus hinting that its next breakout would resolve to the upside.DXY daily price chart featuring symmetrical triangle setup. Source: TradingViewShould a symmetrical triangle breakout occur, the technical profit target for bulls will be as high as the maximum distance between the structure’s upper and lower trendlines when measured from the breakout point. That puts the dollar en route to roughly 97.80 in the coming session.Weaker euro behind dollar’s strengthThe bullish outlook for the greenback appears against the prospects of the Federal Reserve’s tapering plans. Notably, the U.S. central bank signaled earlier in December its willingness to tighten its ongoing monetary policy faster than expected, adding it would follow up with three rate hikes in 2022.Meanwhile, the recent strength in the dollar index, in part, came due to an ongoing cash glut in the eurozone. A wave of stimulus programs initiated by the European Central Bank (ECB) in the wake of the COVID-19 pandemic left eurozone banks with excessive cash, financial researcher FactSet noted.EUR/USD daily price chart featuring its downtrend since May 2021. Source: TradingViewAs a result, these banks have been now exchanging their extra euros for dollars via the Fed’s reverse repo facility, which offers them 0.05% interest for parking cash, which is better than the short-dated European government debt that comes with negative yields. On Dec. 20, nearly $1.7 trillion flowed into the Fed’s repo facility, the highest one-day cash injection to date.Daily inflows into the Fed’s reverse repo facility rising since May 2021. Source: Federal Reserve Bank of New York Bitcoin’s summer fractal anticipates bull runBitcoin’s latest rise above $51,000 comes as its price tests a multi-month upward sloping trendline as support, as shown in the chart below.BTC/USD daily price chart featuring ascending trendline support. Source: TradingViewNonetheless, BTC price now faces resistance in its 50-day exponential moving average (50-day EMA). The same velvet wave was instrumental in capping Bitcoin’s rebound attempts in November. So the chances of bulls reeling under its pressure are high.But on larger timeframes, there appear possibilities that Bitcoin would continue its bull run further into 2022. For instance, an independent market analyst, Rekt Capital, highlighted the cryptocurrency repeating a trend from its May–July session that later sent its prices to an all-time high of $69,000.”Bitcoin continues to consolidate inside a range formed by two Bull Market EMAs: the green 21-week EMA resistance and the blue 50-week EMA support,” the pseudonymous analyst explained, adding:”Bitcoin formed a similar range inside these two EMAs earlier this year in May (orange circle).”BTC/USD weekly price chart featuring “bull market EMAs” fractal. Source: TradingViewOn the flip side, should Bitcoin break below its 50-week EMA, its likelihood of testing its orange 200-week EMA will become higher based on a similar fractal.BTC/USD weekly price chart featuring 200-week EMA support. Source: TradingViewCurrently, the 200-week EMA sits around $24,250.The views and opinions expressed here are solely those of the author and do not necessarily reflect the views of Cointelegraph.com. Every investment and trading move involves risk, you should conduct your own research when making a decision.