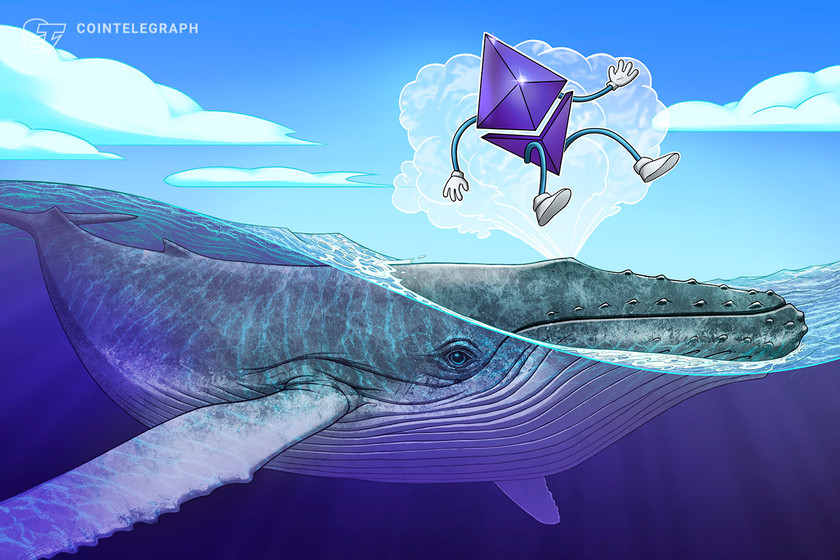 Ethereum is having difficulty keeping its richest investors in line as its native token, Ether (ETH), hints at logging more losses in the near term.Blockchain data analytics service Glassnode revealed that the number of Ethereum addresses holding at least 1,000 ETH dropped to 6,292 this Monday, the lowest reading since April 2017. At its year-to-date peak, the numbers were 7,239 in January.Number of Ethereum addresses with balance of at least 1,000 ETH. Source: GlassnodeOn-chain analysts typically observe ETH distributions among addresses to realize retail and institutional sentiments. They consider wallets that hold above 1,000 ETH (around $3.92 million at currency exchange rates) as “whales,” primarily for their ability to influence interim market trends via large sell and/or buy orders.But as the numbers of these so-called whales drop, it reflects an ongoing selling trend among the richest Ethereum wallet owners. For instance, the number of Ethereum addresses that hold at least 10,000 ETH (or around $39.20 million) has also plunged, from 1,208 in June to 1,156 at the time of this writing, marking an almost 4.5% decline.Number of Ethereum addresses with a balance of at least 10,000 ETH. Source: GlassnodeBut, on a year-to-date timeframe, the numbers have gone up from 1,065 to 1,156, just as the cost to purchase 1 ETH, in the same period, has jumped nearly 450%. Small investors are accumulatingUnlike whales, wallets that hold ETH in small quantities have been at the forefront of Ether’s 2021 price rally.For example, Glassnode’s data shows that the number of Ethereum addresses with a non-zero ETH balance reached an all-time high of over 71.23 million on Monday. That included wallets with at least 0.01 ETH (~$40), whose numbers shot up to 20.31 million versus 10.66 million at the beginning of this year.Meanwhile, addresses that hold at least 0.1 ETH (~$400) jumped to 6.44 million this Monday compared to 3.62 million on Jan. 1, 2021. That is almost a twofold rise, signaling a higher retail interest in the world’s second-largest cryptocurrency.Number of Ethereum addresses with a balance of at least 0.1 ETH. Source: GlassnodeETH eyes bullish reversalThe latest decline in Ether whales appeared as Ether struggled to close decisively above $4,000, its psychological resistance level. On Tuesday, ETH/USD dropped by over 3.27% to an intraday low of $3,880. Its drop came as a part of a wider correction that started after Ether tested a downward sloping trendline as resistance on Dec. 23. The chart below shows that the trendline is a part of a descending channel that appears like a “falling wedge.”ETH/USD daily price chart featuring falling wedge. Source: TradingViewIn detail, falling wedges are technically bullish reversal patterns that appear after the price trends lower inside a trading range featuring two converging trendlines. The instrument eventually breaks above the structure’s upper trendline ahead or after reaching the apex (where two trendlines converge).The profit target in a rising wedge scenario is generally obtained after adding the maximum distance between the structure’s upper and lower trendline to the breakout point. That puts ETH’s price en route to the $4,200–5,000 range, depending on its breakout level.ETH/USD daily price chart featuring falling wedge targets. Source: TradingViewNevertheless, Ether’s price still has enough room to decline, toward $3,200 in the worst-case scenario. The level is where wedge’s trendlines converge.Related: 3 reasons why Ethereum price can drop below $3K by the end of 2021Meanwhile, independent market analyst Pentoshi said that nothing concrete can be predicted for Ether now as it remains stuck between a “bear contested” and a “bull contested” area, as shown in the chart below.ETH/USD three-day price chart. Source: TradingView, Pentoshi“Maybe it’s the bottom. Don’t care,” tweeted Pentoshi on Tuesday. “I don’t like when them market gives this many times to buy an area with important historical context like this Would rather pay for confirmation.”The views and opinions expressed here are solely those of the author and do not necessarily reflect the views of Cointelegraph.com. Every investment and trading move involves risk, you should conduct your own research when making a decision.