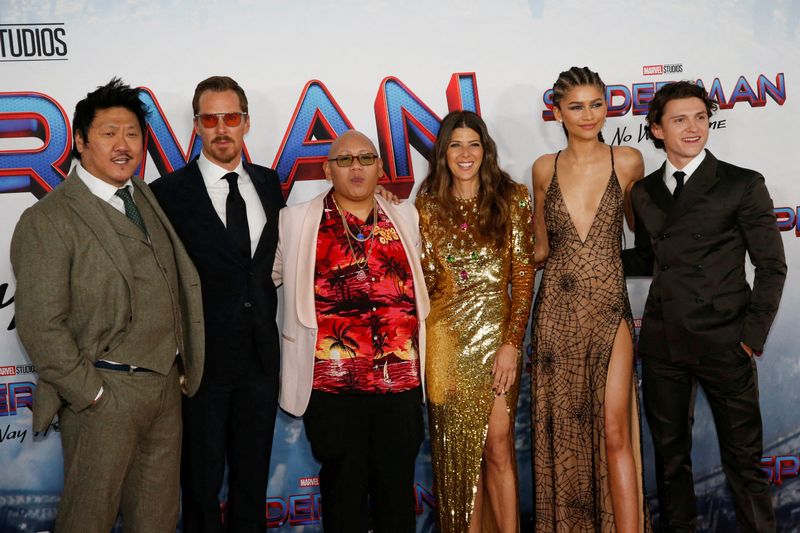 By Lisa Richwine LOS ANGELES (Reuters) -“Spider-Man: No Way Home” racked up roughly $253 million in U.S. and Canadian ticket sales over the weekend, crushing pandemic records and ranking as the third-biggest domestic debut in Hollywood history, distributor Sony Corp (T:) said on Sunday. Around the globe, “No Way Home” generated an additional $334.2 million for a worldwide weekend total of $587.2 million, the studio’s estimates said. The blockbuster returns provided a much-needed jolt to cinemas such as AMC Entertainment (NYSE:), Cinemark and Cineworld that have struggled to draw crowds during the COVID-19 crisis. The spread of the Omicron variant https://www.reuters.com/world/threat-omicron-looms-over-christmas-holidays-europe-us-2021-12-19 has sparked new concerns. But as Broadway and New York City’s Rockettes canceled shows and the National Football League postponed games, theaters were abuzz. Fans packed auditoriums for “No Way Home,” a big-budget superhero spectacle co-produced by Sony (NYSE:) and Walt Disney (NYSE:) Co that is playing only in theaters. The movie stars Tom Holland as Marvel’s web-slinging superhero and Zendaya, as his girlfriend MJ, in the third film in a Spider-Man trilogy. It also brings back stars of previous “Spider-Man” films. “This weekend’s historic ‘Spider-Man: No Way Home’ results, from all over the world and in the face of many challenges, reaffirm the unmatched cultural impact that exclusive theatrical films can have,” Sony Pictures Chairman and CEO Tom Rothman said in a statement.
The previous pandemic record was set by superhero film “Venom: Let There Be Carnage,” https://www.reuters.com/lifestyle/venom-bond-pull-4-mln-people-amc-theaters-over-weekend-2021-10-04 which took in $90 million domestically over its first three days in October. Cinemark said ticket sales for “No Way Home” were especially strong in the United States and Latin America and on large-format screens.
Disclaimer: Fusion Media would like to remind you that the data contained in this website is not necessarily real-time nor accurate. All CFDs (stocks, indexes, futures) and Forex prices are not provided by exchanges but rather by market makers, and so prices may not be accurate and may differ from the actual market price, meaning prices are indicative and not appropriate for trading purposes. Therefore Fusion Media doesn`t bear any responsibility for any trading losses you might incur as a result of using this data.Fusion Media or anyone involved with Fusion Media will not accept any liability for loss or damage as a result of reliance on the information including data, quotes, charts and buy/sell signals contained within this website. Please be fully informed regarding the risks and costs associated with trading the financial markets, it is one of the riskiest investment forms possible.